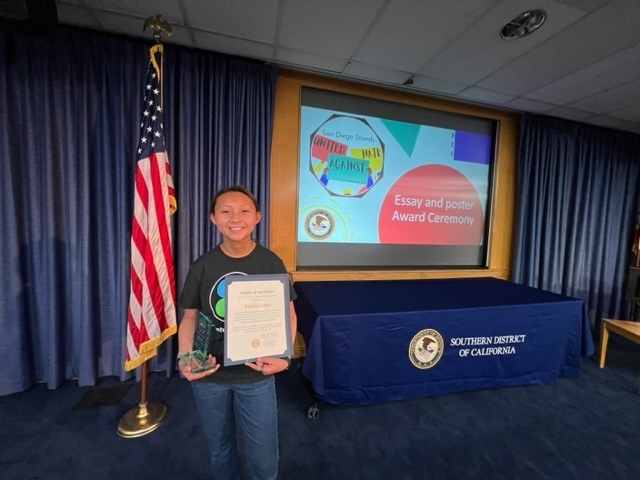 Quantum Academy is proud of 8th grader Felicia S. who won first place for middle school in the United Against Hate Essay Contest from the US Attorney's Office and had her essay featured in the  Union Tribune.  Congratulations!

Read her full essay below:

Ally, Not a Bystander: A Fictional Narrative

You were a bystander.
You’d seen the things the kids at your school did to people they deemed ‘weird’. They were bullied, harassed, and ostracized by the general school population. You saw what was going on, yet you didn’t do anything. Thoughts such as, ‘It’s none of my business!’ and ‘It’s not my problem!’ prevented you from doing so. But at the end of it all, that’s what you were. You were a bystander. Though in the future, you'd come to resent ever being such.
-
Earlier that week, you had made eye contact with one of the school tyrants’ regular targets while
the bullies wailed attacks on the poor soul. Their eyes desperately pleaded for help. You’d looked back down at your shoes. ‘Don’t look at me,’ you’d thought back then, ‘I can’t do anything! I’m just a bystander!’
-
You’d found yourself unable to sleep that night. That night, you found yourself thinking about one of your friends. Sure, you didn’t talk as much anymore, and they never hung out with you these days, but still! You had been friends for years so of course you still counted them as a friend!
They were one of the people your schoolmates deemed as ‘odd.’ ‘A social pariah,’ they’d once
half-heartedly joked. You would later realize that was one of the last jokes you heard from them.
You knew some kids in their class that thought of themselves as ‘thugs’ harassed them. You knew
that for a fact because a month ago, you were walking around the school campus during break and you had turned around the corner and saw your friend. They were being pushed and shoved around while the bystanders jeered. You turned back and ran around the corner again before they could see you.
-

A few days later, and you’d been doom scrolling through yet another social media site when you came across a photo. It was of you and your friend. You’d stared blankly at it. It looked back at you
from your phone, the only thing illuminating your dim room. Then, the realization, it all came crashing down upon you. “How long has it been since I last saw them smile?” You then came to the shocking revelation that... you couldn’t remember. You checked the date of the photo. It was posted a year ago. A year ago... A lot can happen in a year.
In a year, they started to become quieter.
In a year, they started laughing less.
In a year, they started to shirk away from your touch.
In a year, they stopped smiling.
You left the app and went to your contacts where you stared at their number.
You pressed call.
They pressed answer.
“Hey...” you said meekly, something hot and rancid burning at the back of your throat, “we need to
talk.”
-
Many sincere, tearful apologies later and a promise to make it up to them and be a better friend,
the call ended. You sat down and processed it all.
How could you have not noticed?
How could you have stood by and let this happen?
How could you have been a bystander?
You couldn’t answer those questions.

You had a front row seat to see the slow change in their behavior, yet you didn’t notice it. You’d
known they had problems with others at school, yet you stood by. You were a bystander, and you
were starting to really, really hate it.
-
You kept your promise to your friend and met up with them to hang out and make it up to them.
They tell you that you can make it up to them by being a better ally. An ally who takes action to
help stop hate and implicit bias. This was a compromise you’d readily agreed to, wanting to improve yourself, as a friend and as a person.
You two would go to get ice cream as they taught you what an ally was and different ways you
could help stop hate. You learnt a ton of different techniques but the one that stood out to you
was the ‘Stop, Walk, and Talk’ technique. In the technique, you’re supposed to stop the bully with
words, walk away if they persist, and talk to an adult if it continues.
Although intimidated by the prospect of confronting your problems, you knew that if you succeeded, it would be worth it in the end.
-
It was hard at first. You’d asked the bullies to stop messing with your friend, and they laughed in
your face and threw you aside. You’d grabbed your friend and walked away. The bullies were expelled after you told an adult and reports of their misdeeds came flooding into the principal's office, other victims of their bullying likely emboldened by your act.
-
It seemed that the other students caught onto the ‘Stop, Walk, and Talk’ technique, it being more
popular around the school than ever. The bullying rates steadily decreased as time went on and the school became a place that you’d genuinely enjoy.
You’d seen the things the kids at your school did to people they deemed ‘weird’. They were bullied, harassed, and ostracized by the general school population. You saw what was going on, and you did something about it. You didn’t let thoughts such as, ‘It’s none of my business!’ and ‘It’s not my problem!’ prevent you from doing so.

You were an ally, not a bystander.